Who's Who of Veronica Mars

Who's Who of Veronica Mars — V

Neptune nurse. This fearsome battlemaiden storms Meg's lonely chamber to drive expecting fathers and other unwanted visitors away. Would that she had been able to protect her from nature's course as well, but alas, it wasn't to be. Val can't force a happy ending in 2.10 "One Angry Veronica."

Painter. Listen 'ere. Two Lovers, in the possession of Kendall Casablancas, is real and is in the hands of a private collector. Hmmm. Keith recognized the master when he first saw it. Van Gogh was one of the finest artists of his or any generation, drafting some of the most famous paintings in the world in a ten-year creative cyclone. The cost was his increasing mental stability, one of his earlobes, and ultimately his life. Upon retrieving the painting from the Kretchmer County sheriff, Keith gave it all away in a ten-minute philanthropic cyclone. The cost was his steady gait, his lily-white skin, and ultimately Kendall's life. Way to Gogh, Keith, in 3.02 "My Big Fat Greek Rush Week."

Vinnie's receptionist and mother. She's happy to get some Neptune Spirit and buy her baby some mint cookies in 1.17 "Kanes and Abel's."

Another former wife of Vincent Van Lowe. He really must have an attractive feature we're just not seeing. Her name explodes from Vinnie's bitter lips in 1.17 "Kanes and Abel's."

A green demon who can read futures when people sing— oh, wait, wrong Lorne. Mea culpa. This Lorne's just a fratboy for Pi Sigma. It's not easy being drunk in 2.16 "The Rapes of Graff."

Band. Max has a poster in his room, perhaps in preparation for when God comes down on Christmas day, as he knows exactly what He'll say. He'll say, "Oi to the punks, and Oi to the skins, but Oi to the world and everybody wins." This does not happen in 3.05 "President Evil."

Father of Troy. He is the architect who built the County Museum. Architect? Are you sure? We can't imagine that mug within a hundred yards of beautiful buildings. He loves his car more than his son. Rightly, as it turns out. He was mentioned in 1.02 "Credit Where Credit's Due" but not seen until 1.05 "You Think You Know Somebody."

Umm. Uhh. Singer? We are stunned to learn that Veronica once wanted to marry this sad excuse for a rapper. She admits to this travesty in 1.09 "Drinking the Kool-Aid."

Sea lion lover. Hater? It's not clear what exactly the newspaper story featuring Mr. (or Ms.?) Vargas is about, but it definitely involves sea lions, attacks on swimmers, and charges being laid. Perhaps Vargas released the sea lions after dressing them in yellow bow ties and giving them a taste for mammal blood. Those swimmers should have been on the lookout for loose seals in 3.15 "Papa's Cabin."

One of the six guys you'd pretty much expect to be invited to join the Tritons. Looking at the initiates, can everyone say "repressed homosexuality" with feeling? Steve may or may not be a Triton initiate (Rick was just guessing) in 1.12 "Clash of the Tritons."

Candidate for Student Council President for 2004/2005. This former pep squadder blazed the egalitarian trail for the have-nots against the 09er status quo. As is not unknown in the world of politics, Wanda's dirty little secret, in this case that she was a narc, cost her the job in 1.06 "Return of the Kane."

Hottie newswoman from Channel 9. Veronica impersonates her and her lovely accent over the phone in order to get information from a starstruck Sheriff Don Lamb, who has to pretend that he's actually interested in a story about the morning-after pill. According to her bio, Martina was born and raised in Austin, Texas, got her start on televised news in Tucson, Arizona, and now is a co-anchor in San Diego, California. We're sure she's a lovely and hard-hitting journalist, but she doesn't actually appear in 3.08 "Lord of the Pi's."

Hollywood detective on the fictional detective show Sunset and Vaughn in the fictional world of Cupid. Are you following me here? He's a South Central ganglord gone straight. Hell, he even uses words like "amenable." But this wildly original character never got his due, as the episode he was to appear in never aired in the United States. Episode of Cupid, not Sunset and Vaughn. The latter show isn't real, folks! Which is why we were baffled to see it on Jackie's TiVo in 2.05 "Blast from the Past." 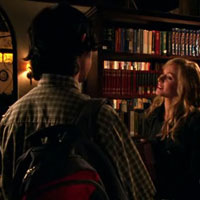 Economist author of Theory of the Leisure Class and one of the leaders of the Efficiency Movement. He coined the phrase "conspicuous consumption." Born and bred in Wisconsin from good Norwegian stock, he would have had a soulmate in Rose from The Golden Girls, but for Rose being a little loopy. His was the last and not by no means least of the books Veronica collected as a disappointing substitute for the soulmate she was expecting in 3.03 "Wichita Linebacker."

The only smart Scooby-Doo character. She is burdened by idiot friends and is so plain that even the very smart Veronica prefers to be Daphne in 1.05 "You Think You Know Somebody."

Veronica Mars and Hallie's Shih Tzu. Hallie spells Veronica's name with a K when making her heart-shaped nametag for Rush Week. Hallie says that it is her dog's name. So either her puppy was called Veronika or Hallie can't spell. We can safely say both options are extremely plausible, having met Hallie in 3.02 "My Big Fat Greek Rush Week."

British punk. One half of an infamous couple, Sid Vicious was a member of the Sex Pistols, and renowned for his tempestuous relationship with girlfriend Nancy Spungen. He overdosed after allegedly murdering Nancy in the Chelsea hotel. Sarah Williams and Andre are compared to Sid and Nancy in 1.07 "The Girl Next Door."

There's nothing hotter than a man who takes his job seriously. This video maniac orders Justin to process late movies, and he grills him about special ordering Body Heat. Dude has "Future C.E.O." written all over him in 1.03 "Meet John Smith."

Victim of two ruthless rich boys. Or hooker with a punchy pimp, depending on which version of the story you're inclined to believe. The jury of their case, including a certain youthful sleuth, has to judge over this pars pro toto of the Neptune class war in 2.10 "One Angry Veronica."

Ex-wife of Vinnie Van Lowe. Her whereabouts on tour as Jasmine in Aladdin on Ice are a bit of a mystery as Veronica says she's in Europe and the screen says she's in Omaha, NE. Veronica is smart, but maybe she needs a geography refresher in 1.17 "Kanes and Abel's."

Aaron's pimp. He gets Aaron an eight figure salary, albeit for a director who hasn't made a movie worth watching since the seventies. Must be George Lucas. Pimps abound in 1.06 "Return of the Kane."

Student of Chinese. In a show of amazing grace and mental dexterity, he and fellow classmate translate a Chinese character for Veronica. All symbols point to Professor Grace Schaffer, an assistant professor. Vincent graces us with his mad decoding skillz in 3.17 "Debasement Tapes."

Castle member, class of 1931. Classmate of Franklin Crawford, III, he did not survive very long once Franklin became consumed with the idea that Travis Vincent was the two-first-named ultimate evil that the prophecies foretold. How he died is unknown, as are where and when. The Castle protects its own. But not from other Castle members. Mr. Vincent's secrets stay buried in 3.20 "The Bitch Is Back."

Emblematic of early alternative music, some of the Femmes' hits include "Kiss Off," quoted above, "Gone Daddy Gone," "Blister in the Sun"... I could go on. They were big, they were awesome, and obviously someone at the radio station feels the same way, since their poster is on the wall in 3.06 "Hi, Infidelity."

The mother of Jesus Christ, a.k.a. . She was impregnated by God without sex which, depending on one's beliefs, is either a holy act or the first recorded case of artificial insemination. As rather a lot of people go for the former explanation, the spontaneous appearances of images of the blessed maiden are considered miracles to behold. In the modern age, miracles can be liquidated and a Virgin-blessed grilled cheese sandwich can raise a fortune. Piznarski's face looks a bit like a grilled cheese sandwich after being pummelled by a misguided angel of vengeance, right down to the bruise in the shape of the Virgin Mary. The working class boy might be well advised to leave Neptune, get a skin graft to remove and preserve his bruise, and invest in a different future — for it's as clear as the bruises on his face that he doesn't have one with Veronica Mars after the events in 3.20 "The Bitch Is Back."

The pen name of Francois Marie Arouet, French philosopher, writer and wit, and author of Candide. Victoria Riggleman, oblivious of her/his gender confusion, is inspired by Voltaire's words, according to her/his year book entry: "God is a comedian playing to an audience too afraid to laugh." God must be chuckling over this boy with a girl's name. Is Victoria the modern day Candide, living her/his life in acceptance that it offers the best of all possible worlds to be a boy named Victoria? Is changing her/his name out of the question? Voltaire turns in his grave, or is possibly amused, in 1.07 "The Girl Next Door."

Invisible Children volunteer who signs up Wallace for a summer in Africa. Looking nothing like Ryan Hansen (noted Invisible Children volunteer) or Christopher Eccleston (noted invisible person) or Marcie Ross (noted invisible killer — well, to Buffy fans anyway), he pimps with purpose for a worthy cause in 3.18 "I Know What You'll Do Next Summer."